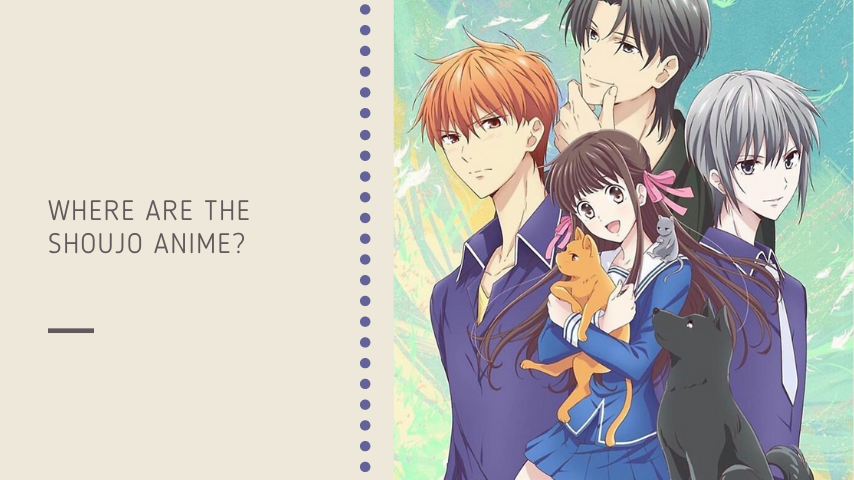 I don’t know when was the last time Shoujo anime became prominent. For some time, there has been fewer and fewer series of this demographic turned into anime counting the remake of Fruits Basket. Did something change? Maybe.

If you’re like me who keeps up with seasonal anime, you could already guess what are the most popular ones as of this writing. It felt like a void exists between anime that keeps pumping out every season. Don’t get it? I’ll give you a question: Do people talk about Shoujo anime frequently? The answer may vary from where you come from.

Personally, the demographic seemed to have suffered from being buried to the more in-demand ones and some people don’t admit they love it. Googling the term “Shoujo anime” will give you mixed results. Why? Some anime can be mistaken as a shoujo even if it came from a magazine intended for a different demographic. It has these (common) elements:

This is like the bare minimum of what the demographic is like yet there are underlying themes which can be on the same level as its other counterpart, Shounen. Shoujo anime can even trick you to learn gut-wrenching lessons in the most mundane way possible. Some follow its own color palette. Heck, it can be full of action too! Does anyone still know its mature form, Josei? Anyone?

A number of manga were turned into Live-action movies or dramas to save production costs. However, since the manga was adapted in a different medium the licensing costs of having it screened in other countries is low. The accessibility of them becomes harder to get with how it’s specifically intended for Japanese audiences only. We’re quite lucky Fruits Basket’s anime remake will tell the full story in animated form because the production committee knows there is demand for it and the creator has full rights this time.

Also, you can have a shoujo anime without relying on a female lead. Best example: Banana Fish. On paper, the very premise looked like it could’ve been published in a seinen magazine with the presence of hard-to-swallow topics. And if you look into the publication history, it came from Bessatsu Shōjo Comic, not from any other magazine.

I remember I tried watching Children of the Whales when it was airing and I dropped it. It had it all: a fictional setting with an excellent use of colors. Characters are distinct having their own flare. Yet, it wasn’t able to utilize it to the full potential and most of the characters felt too dry. Even pacing issues was apparent in the first three episodes. When it ended, no one felt the need to revisit it again. A waste. After all, it’s how if it can stay good.

I would wish this form of anime would be talked about again. I know this is hard to be granted but the current landscape is too saturated. Everything feels the same, and there hasn’t been an era for Shoujo anime since the early 2010s. Trends come and go, they say.

Are there any reasons you think why Shoujo anime has been out of the spotlight? Are there personal biases that keeps you from liking it? Let me know.

20 thoughts on “Where Are the Shoujo Anime?”